Dragonforce - "The Power Within" Webisode #2 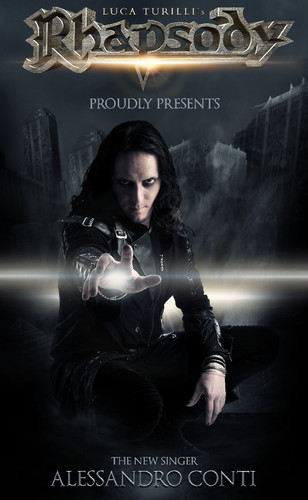 "Today is a great and very important day for our band. We are finally proud to present the new singer of RHAPSODY to the world, the person who, thanks to his unique vocal talent, will contribute to the artistic perspectives of the band in the years to come.

"The secret is finally revealed: the new singer is Italian and his name is Alessandro Conti (TRICK OR TREAT)."

Luca Turilli: "Alessandro is the singer of our band since many months already but we wanted to present him in the way he deserves, and this means: through his voice! We wanted to find a singer able to sing in different ways and offering different 'colors.' Such ability is fundamental for me as in every RHAPSODY album I like to compose different styles of songs, passing from the most cinematic and epic impact of some songs to the operatic majesty of other ones, from celestial voices to more aggressive tones. Alessandro was just the best choice in this sense as, in between the multitude of all his vocal colors, he has a great high tone but also an operatic approach that makes the difference. He studied at the Corale Lirica Rossini of Modena as first tenor, the same school attended by the great and unforgettable Luciano Pavarotti."

Alessandro: "I am very enthusiastic to be the new voice of RHAPSODY and the person the band was searching for. 'Ascending To Infinity' is just an amazing piece of art and maybe not even the word 'epic' is enough to describe its emotional power... what is sure is that I am really proud to be part of it. Now I am looking forward to meeting all the existing and new RHAPSODY fans around the world. See you soon!"

Sister - "Spit on Me" video