Killswitch Engage - "In Due Time" video 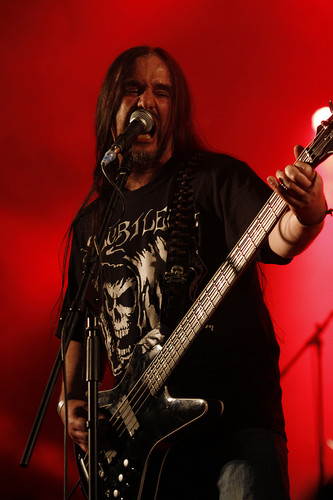 "We've taken stylistic cues from all the albums because it's in our blood, but it's no rehash or mess of ideas. I think it sounds almost like the missing link between the third and forth albums but with some groove in there. I've jokingly christened some parts 'trad blast' and some 'death sleaze'... don't think for a minute this is just some nostalgic throwback album — we're setting up another 17 years of ideas for other bands to copy and clean up on. [laughs]"

Questionado se as vozes guturais faziam um regresso, Walker disse: "Yes, already in the can. It's more along the lines of how I envisioned him backing me up on 'Heartwork'. That said, my own vocals have a hell of a lot more range than they did in the past solely down to the luxury of having time to record them — I did all the vox for 'Heartwork' in two days and it shows! Also, (hopefully) [drummer] Ken [Owen] will make an appearance — we just need to tidy a few loose ends before the mix."

Bill Steer falou à Terrorizer: "I found myself playing riffs that sounded like CARCASS. This was after the band had finished the whole reunion cycle of shows and festivals. So, officially, I would have been playing with other bands and stuff, but for some reason whenever I picked up a guitar at home I was coming up with riffs that sounded like CARCASS. I got on the phone to Jeff [Walker, bass/vocals] and said, 'We could have a crack at writing a couple of tunes and seeing if they're strong enough and take it from there.' We also agreed if it didn't sound like carcass or have that kind of vibe to it, we would just drop it. So that was the thing, we got together and started working on some stuff and just immediately got the excitement back very quickly."

"It definitely sounds like CARCASS. I think we just generally by accident captured the flavor of past music that we have done and you can't help but push it forward. We have really been creative and when you are looking at things like guitar harmonies, it's way more adventurous on this record. It's not just parallel harmony like we did in the past, things branch off in different directions.

"A lot of what is happening now is based on rhythms rather than actual riffs. We were discussing this a lot during record sessions about how the riff is almost dying or dead already. People spend a lot of time chugging on the bottom string [but] that's a rhythm, it's not a riff. We can't write a song, never mind an album, without it being choc-full of riffs."

acrescentou Jeff Walker: "I'd like to feel like we are giving CARCASS fans what they want again. I'm a realist and I think Bill has realized and Dan know what people like about CARCASS. We're definitely delivering."